ou can gain a tremendous advantage if you trade places with the opposite sex mentally.  You’ll need to put forth a lot of mental effort to do this, but you’ll appreciate the benefits once you have this information.

I never stopped to seriously consider a women’s perspective when it came to approaching them for a dance, conversation, or a date.  I guess I was always too wrapped up in my own concerns and desires.  This all changed when I went to a gay bar with a (former) girlfriend who wanted to go there to make a donation for World Aids Day in honor of her son who is gay.

Her son had been fatally shot in front of her in their multimillion-dollar home during a light scuffle with a police officer who had a history of questionable shootings.  She took the matter to court, but due to legal restrictions on access to police officer records, she lost the case.  These tragic events led to the demise of her marriage.   I was quite moved by this story, as you can imagine, so I had no problem going with her to make the donation.

I had never been to a gay bar and it’s not a place that I’d frequent since it’s opposite to my lifestyle.  That is not to say that I have anything against gay people because I do not.  I find them to be thoughtful, humorous, and intelligent on the most part.  Nor am I saying that you need to go to a gay bar to gain this perspective.  It was just an experience that opened my eyes to what women go through with men.

I guess the gay men in this bar did not interpret the woman sitting next to me as my girlfriend because several of them “hit on” me right in front of her.  Although I am secure in my own sexually, the first time it happened I got pretty mad and immediately straightened out the guy by telling him that I was NOT gay!  A few minutes later I realized how I had overreacted and I apologized to him.  After all, I was in a “gay” bar, which is “their” territory.  So from that point on, I was polite to everyone.  I decided to treat the situation like an anthropologist on a field study project to an area that most “straight” people have no experience or understanding.   So we stayed and had a drink while she submitted her donation.

It was a very strange feeling to be approached by men in a similar way that straight guys hit on women.  This is not to say that I look or act feminine in any way because I don’t.  Apparently, gay men have different rules when it comes to approaching someone they are interested in.  I’ve had women hit on me quite a few times but for the most part, they did it in a very subtle and almost undetectable way.  It has always been a turn off to me when women pursue me in a direct manner like a guy might do.

I was also approached by a much younger guy, which was rather startling to me.  It felt even more inappropriate beyond my sex origination.  This incident gave me a little insight on the “cougar” lifestyle.

Although it could be considered a compliment to be hit on, I was not comfortable completely accepting it as such since it involved a man and I am straight.  Interestingly, as I mentioned earlier, I am not particularly comfortable when a woman hits on me in a direct manner either.  I am stimulated by the chase as most men and male animals are.

After I was approached a few times I was struck with an epiphany on how women must feel when they are being hit on.  When I say “hit on” I mean attempts to start a conversation with an obvious purpose, being asked to dance, or being given a note with a phone number.  The young guy gave me a note.  I had no idea what was happening when he handed it to me. 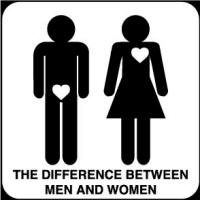 That experience kept me thinking about women’s perspective.  I wanted to gain a deeper understanding so I spend quite a bit of time attempting to reverse the roles in my mind to what it might be like to be a woman and have guys hit on me.  I also spend time observing women’s behavior in nightclubs and at singles dances.  I would zero in on their facial expressions, body language, and reactions with any girlfriends who may have been present before and after they were approached by men.

It would do you little good for me to explain what I discovered, especially if you’re female who is reading this.  This is something that you must experience and learn on your own in order for it to be of true benefit.  I will tell you how I reversed the roles in my mind though.

The hard part for me in reversing the roles was giving my mind permission to “imagine” being a woman and being hit on by men who I found attractive and unattractive.  Permission is required because it feels very strange and counter-intuitive — of course!  In order to feel the attraction part, I had to switch back and forth between imagining that the approaching person was a woman instead of a man.

Here are a couple of generalized tips that are for either male or female readers.

I would also recommend that you conduct an anthropological study of your own by going to nightclubs and singles dances for the purpose of observing “mating” behavior.  You might allocate the first part of the evening to this activity.  Perhaps before your first drink.  After you complete your observation study for the evening, you’ll have a significant advantage over everyone else in the room.  You’ll also most likely have an excellent idea of who the best choices are.

I will share one discovery that you already know but probably have little understanding about.  I offer it as a tip in the state of mind you’ll need to have to be successful in trading places mentally.  Here it is.  Men and women live mentally in completely different and opposite worlds.  Your best chance to gain a little understanding is by visiting their world mentally and through observation.  No bras or jockstraps required. 🙂

Finding the One Who's Right - Compatibility equals Harmony.
Book by Brad Paul, Solotopia